Since my recent success with a high street drugstore foundation, I thought I’d continue searching the aisles for a concealer that would work just as well as my current one.

I had heard rave reviews from friends and family about the Maybelline Instant Age Rewind Eraser Eye concealer and that it is a must have, so I decided that was going to have to be my next purchase. 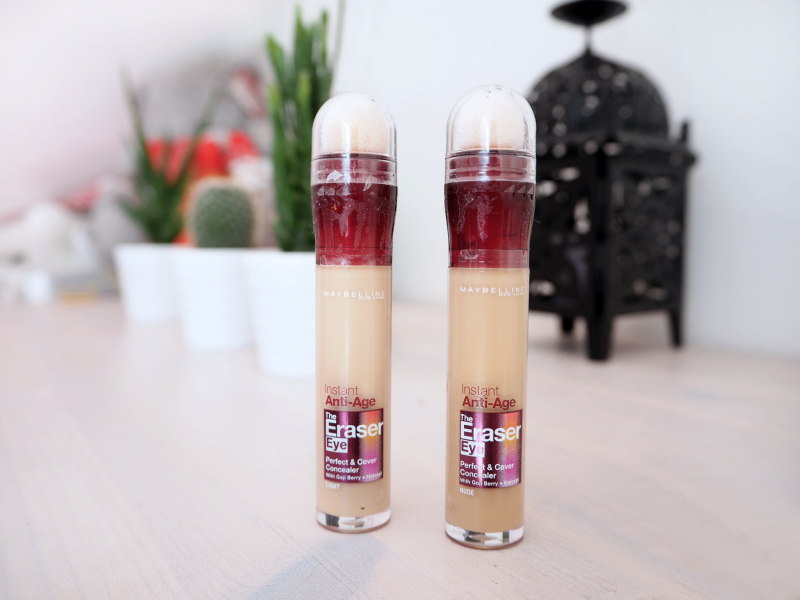 I have to say I was a little bit disappointed at the shade range as they only have two colours: Light & Nude. I thought I might have been mistaken as other websites had different shades but then on closer inspection I realised that was a different product altogether called Maybelline Instant Age Rewind Eraser Dark Circles Treatment Concealer. Not to be mixed up with this one!

Ok so first impressions, the bottles are pretty unique. The concealer comes in a 6.8ml bottle with a sponge applicator at the top. It took me a little while to figure out that you do need to twist the top to allow some product to come out on to the sponge. Once you’ve mastered that, you just press down on to the skin directly and pat it dry (with a brush or beauty blender). I definitely haven’t seen anything like this on the market so I was really impressed.
I love the sponge applicator for the hygiene factor as well as usability. It’s saves a lot of time faffing around looking for a brushes and dispensing just the right amount of concealer out on to my hand first.

Maybelline say that “The formula, enriched with goji berry, helps care for the eye area by hydrating, while covering flawlessly“.

My thoughts before I used the product were ‘Hah, ok. Is there even such a thing as hydrating concealer?’. I then tried the product and my thoughts became ‘omg wtf this concealer is so hydrating? Is this thing real?’. I kid you not, there product is not at all drying nor does it dry out as it sets. I checked back at the end of the day and nope, still not dry and flaky. I really like that the concealer isn’t too dewy but doesn’t dry 100% matte either.

I tried the concealer out for a few weeks with full days at work, days out in the sun and just lounging in the house. The concealer easily lasts up to 6 hours and it doesn’t really separate or cake off either. Obviously the days out where I was sweating quite a bit meant that the concealer wore off a little bit (I have a tendency to pat my face when it’s sweaty) but it definitely wasn’t sliding off. I did find that it creases slightly but nothing major that a little bit of setting powder can’t fix. 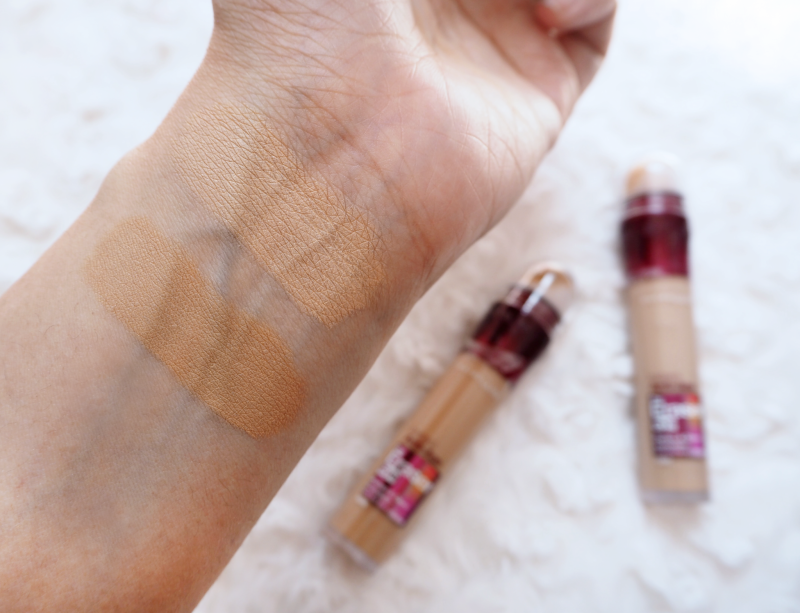 Ok let’s get down to the important stuff – coverage!

As you can see from the swatches above you can see pretty clearly that the Nude isn’t actually nude. It’s orange based so it acts the perfect corrector (for most people). The light on the other hand is very light and pink toned.

I did the swatches over my blue veins so that you can see just how good the coverage is. On both shades, even the Light surprisingly, there is no blue showing through. For a drug store foundation I was seriously surprised at it’s coverage. You’ll notice that I took the Light up to where my creases are and the concealer hasn’t settled into the lines and creased badly.

I’ve been wearing both concealers together and honestly this is a fantastic combination for me. The Nude cancels out my dark circles and then I go over it with Light for a highlighting effect. My dark circles vary on a day to day basis, so sometimes I might go over it ever so lightly with a little bit more of Nude. You’re prob thinking waahhh, way too much layering going on, it’s gonna cake and flake! But fear not, my lovely readers. It’s such a good formula that I can play about with it without any worries.

I’m praying that they come out with better shade ranges because as much as I love the product, I would love a peach toned concealer even more.

The concealer is priced at £8.99 each, which to me, felt a little bit steep when I was paying for it. Especially considering the bottle only contains 6.8ml. Although it looks bigger than my Mac Pro Longwear which is 9ml, this contains a lot less. With that being said, I don’t mind paying for products that actually work and give me the results that I want. So is it worth £8.99? Totally.

The Maybelline Instant Anti-Age Eraser Eye Concealer has become a staple in my everyday makeup routine. I love the ease of use and hydrating feel of the concealer so I would definitely recommend it to you all!

What To Do With Blog Business Cards