For a few weeks now, Shamz and I have been trying to visit Inanamo but the restaurant opens at 5 so it’s been difficult as we’ve been meeting for lunch dates mostly. This week however we met up after work for some din-dins and walked straight past Inamo. It was like a sign! Especially as it had just gone 5, so we walked straight in. 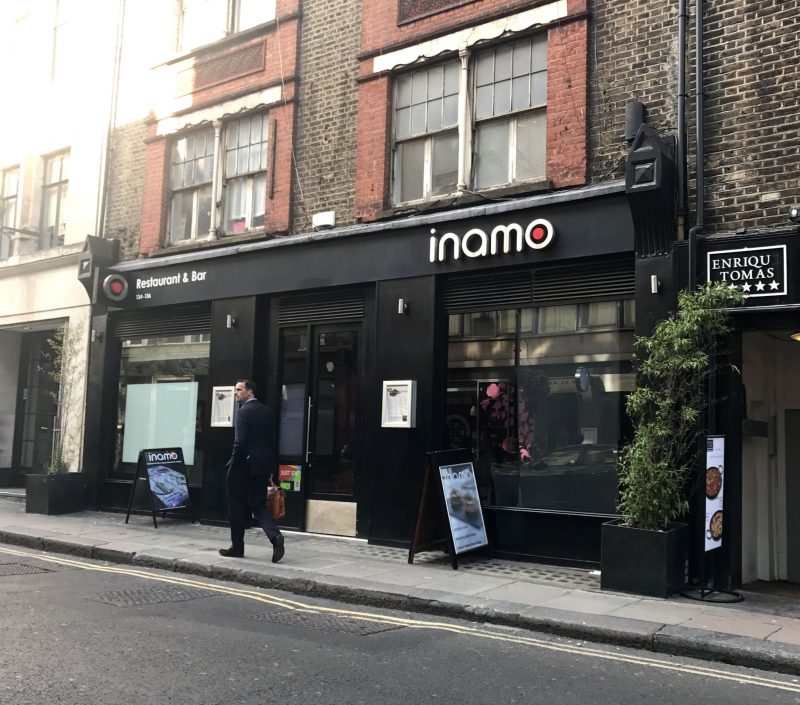 On arrival, we were greeted by the waitress who asked if we had a booking. Since we didn’t, we were given a time frame that we had to have finished our food by and give the table back. I was a little surprised as I’d never had this before but we agreed to eat there anyway.

The waitress seated us and explained how the interactive restaurant worked. You move the onscreen cursor using the touchpad built into the corner of your table to navigate the menu. Point and click to order food, drinks, request the bill, play a few simple games while you wait. If I’m honest, the novelty grew old real quick.
Although the technology side of it worked really well and there were no glitches, if you’re like me and have terrible eyesight, you’ll find that it does start giving you a bit of a headache and suddenly I understood the real value of a physical menu. 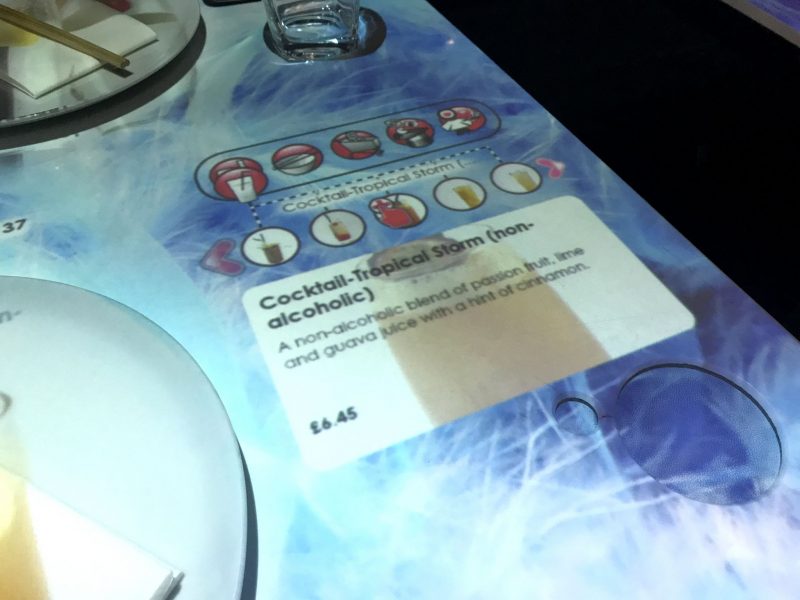 I had read somewhere that Inamo was halal so I asked a waitress to clarify and she said it wasn’t so we opted for some veggie dishes.
We decided to share the Vegetable Tempura and Crispy Tofu between us and order some tropical mocktails.

I liked the fact that they had pictures to accompany each dish on the menu so you kind of, sort of had an idea of what you were ordering because if you’re not very familar with Japanese food (Wagamama doesn’t count!) then it can get a little tricky. Even with the pictures though, I must admit I struggled. Even a basic glossary of Japanese food terms for those unfamiliar with Japanese cuisine would’ve been useful.

The food comes out as soon as it is made so there’s no ‘starter and main’ in the usual sense. It can get a bit annoying if there’s a few of you and you’re all polite enough to wait until everyone’s food has arrived. Instead it’s probably best to order a mixture of things that you can all share. 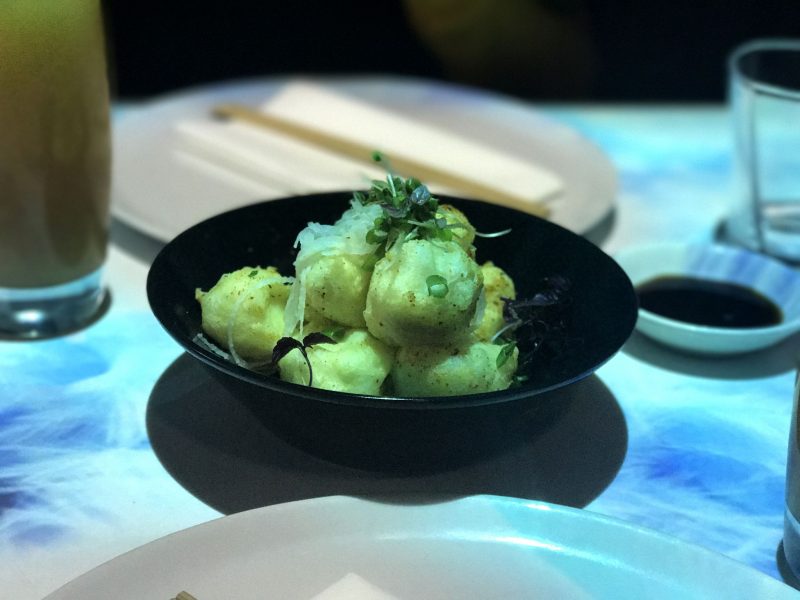 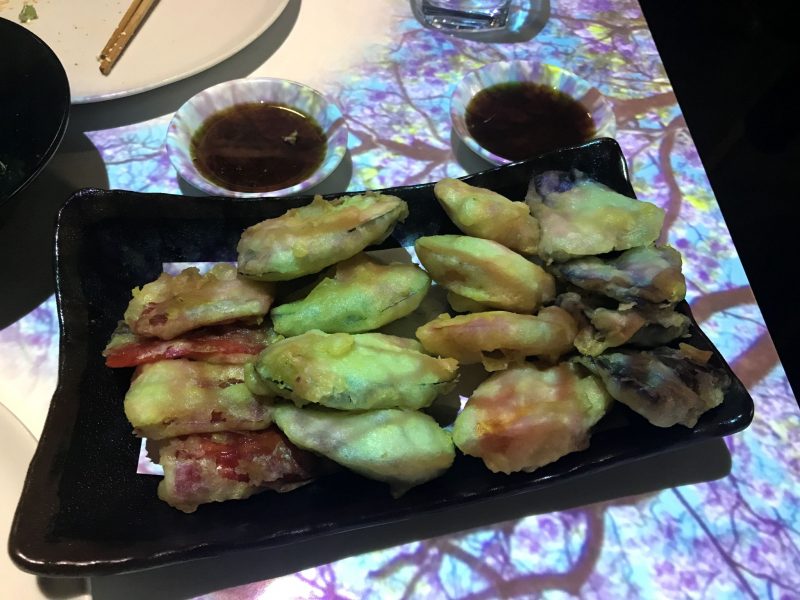 I hate it to say it but the food was average at best. I liked that it came out freshly made, however the oil hadn’t been drained properly from the dishes and it lacked flavour/seasoning. I also didn’t like the fact that there were no condiments (aside from dipping sauces that may or may not come with your dish) and that there was only a single pair of chopsticks on the table. No cutlery for those of us who are chopstickally challenged! Since they don’t make it easy to hail over a waitress (you have to buzz for them using the interactive table), I was determined to learn and by the end of my meal I had figured out how to use the chopsticks! 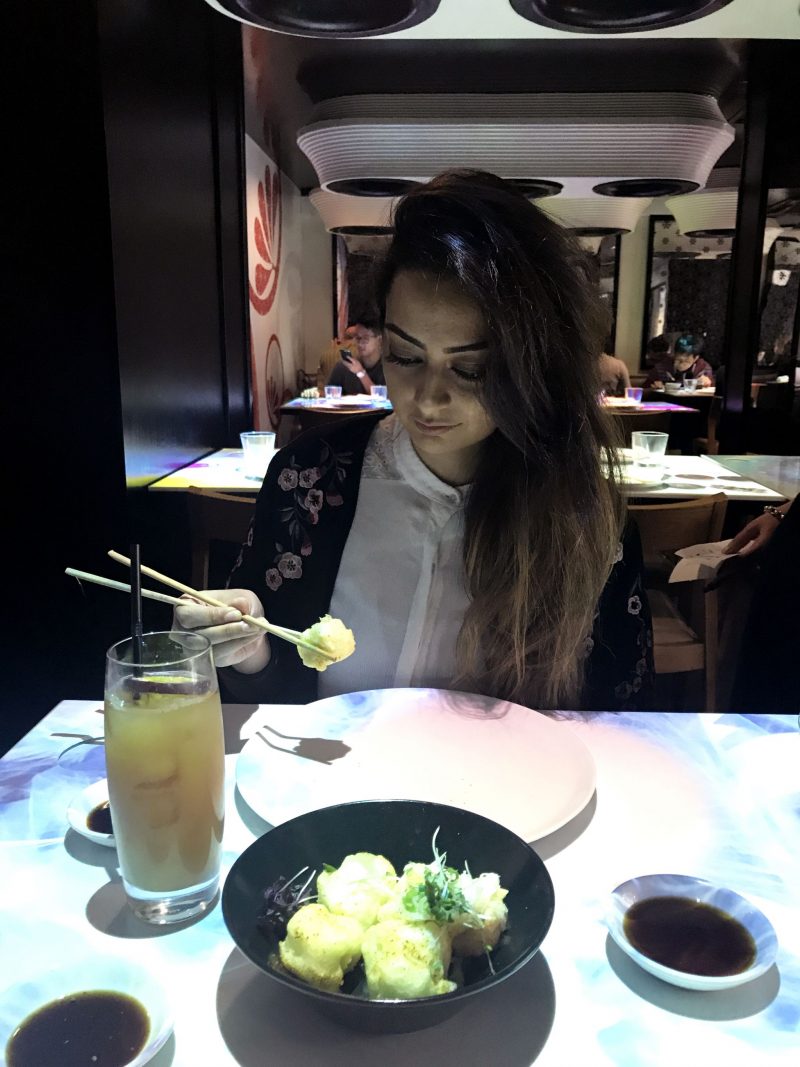 Since the food tasted average at best, the price felt even steeper than it was. £6.45 for a “Tropical storm” mocktail that tasted like it was out of the Tesco Value tropical carton. Not best pleased!

All in all, it’s a great concept but one that just didn’t work for me. It’s too much fuss and not enough flavour. I’m not sorry to say, I won’t be back.