This week I visited the indulgent pop up Dolce by Ferrero Rocher in St Martin’s Courtyard, Covent Garden. Luckily the weather wasn’t very cold or raining because as soon as we got to St Martins Courtyard, we could already see there was a bit of a queue. It didn’t seem too long so we joined the end of it. The staff came round to let us know that the wait could be up to two hours but I explained to the (oddly pessimistic) man that yes, but it is chocolate after all. 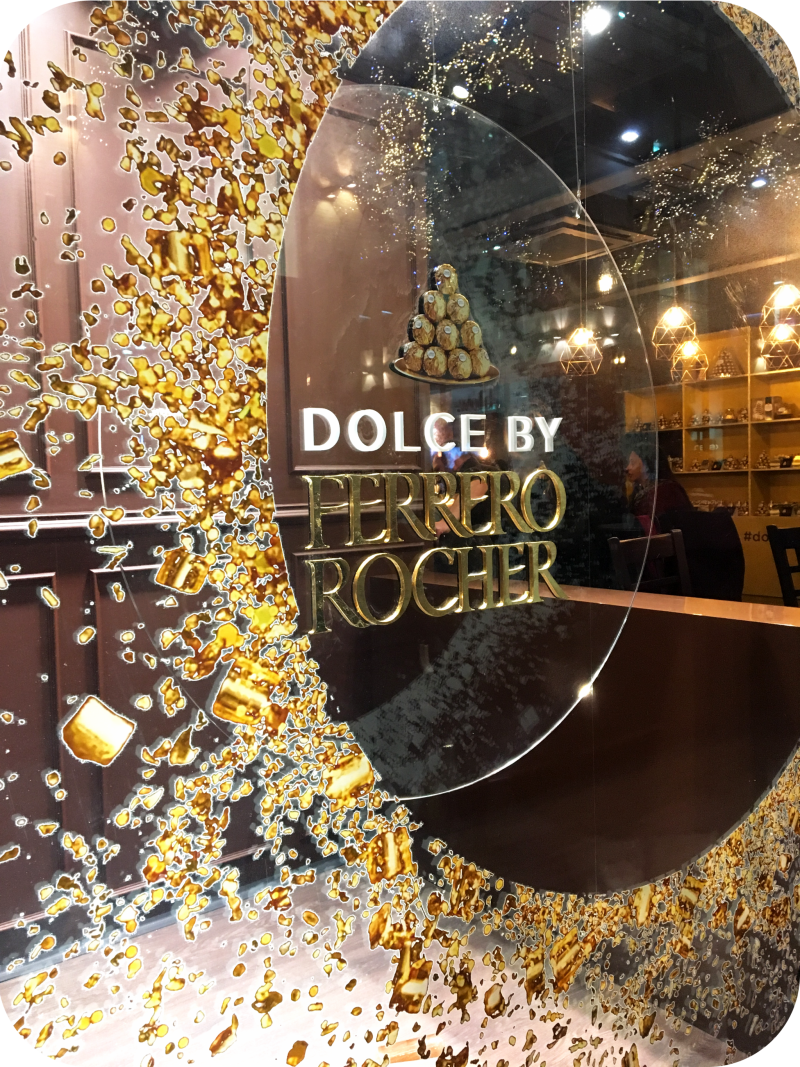 Once we finally got through the doors we were seated at a table laden with gold plates and gold cutlery. The waitress came over and offered us tea, coffee or prosecco. I wasn’t in the mood for a hot drink so I stuck with water which was already supplied on the table.

So what is a multilayered dining experience? Well, the creator of Ferrero Rocher has designed a plate of mini hand crafted desserts all inspired by each layer of the Ferrero Rocher. Paul Hannagen (owner, director and head chef at Cuisson) is the genius behind this concept so I was expecting something pretty luxurious and luxurious is what I got. 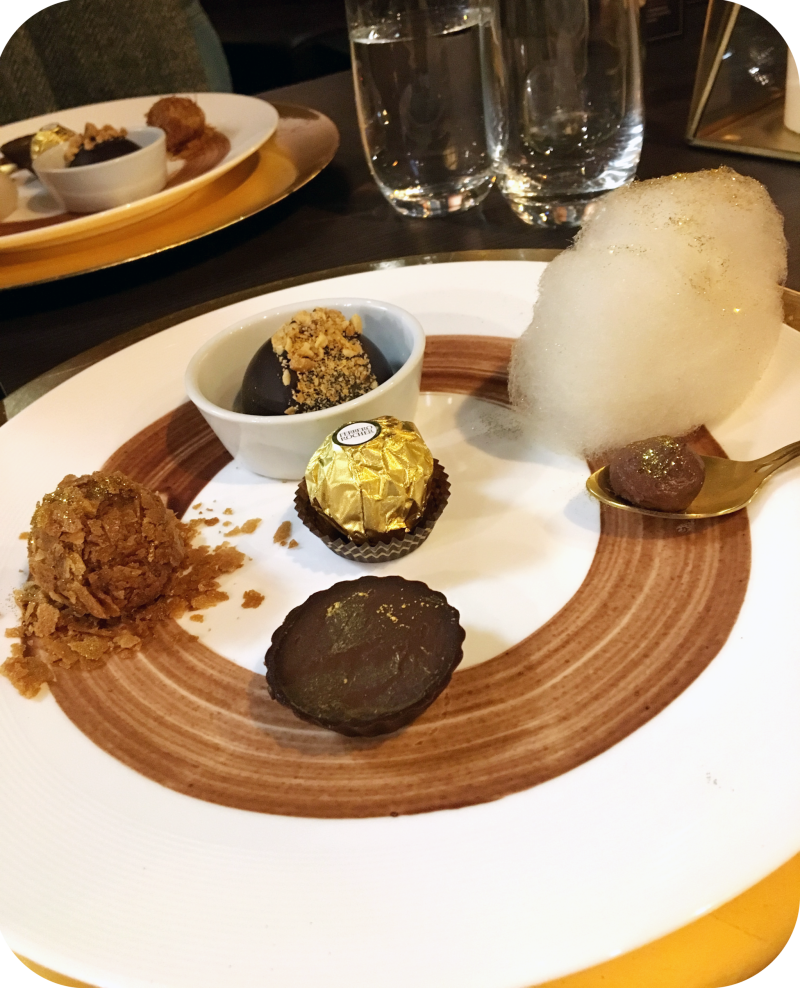 The desserts consist of a tempered chocolate dome topped with roasted hazelnut pieces on to which the waitress poured steaming hot dark chocolate over; cocoa-roasted whole hazelnut wrapped in light praline mousse (in celebration of the centre of Ferrero Rocher), a chocolate case brimming with silky ganache (inspired by Ferrero Rocher’s rich smooth chocolate layer) and wisps of soft spun sugar dusted with edible gold glitter (paying tribute to the elegant golden wrapper) – in other words, glittery candy floss!

After you work your way round the plate, taking centre stage is a Ferrero Rocher to finish with. The desserts, despite being mini were very very rich so I ended up taking the Ferrero Rocher away for a little bit later.

The wall covered in Ferrero Rocher’s is probably the highlight of the pop up shop. I mean, if you don’t take a picture of/with it, did you even really go? 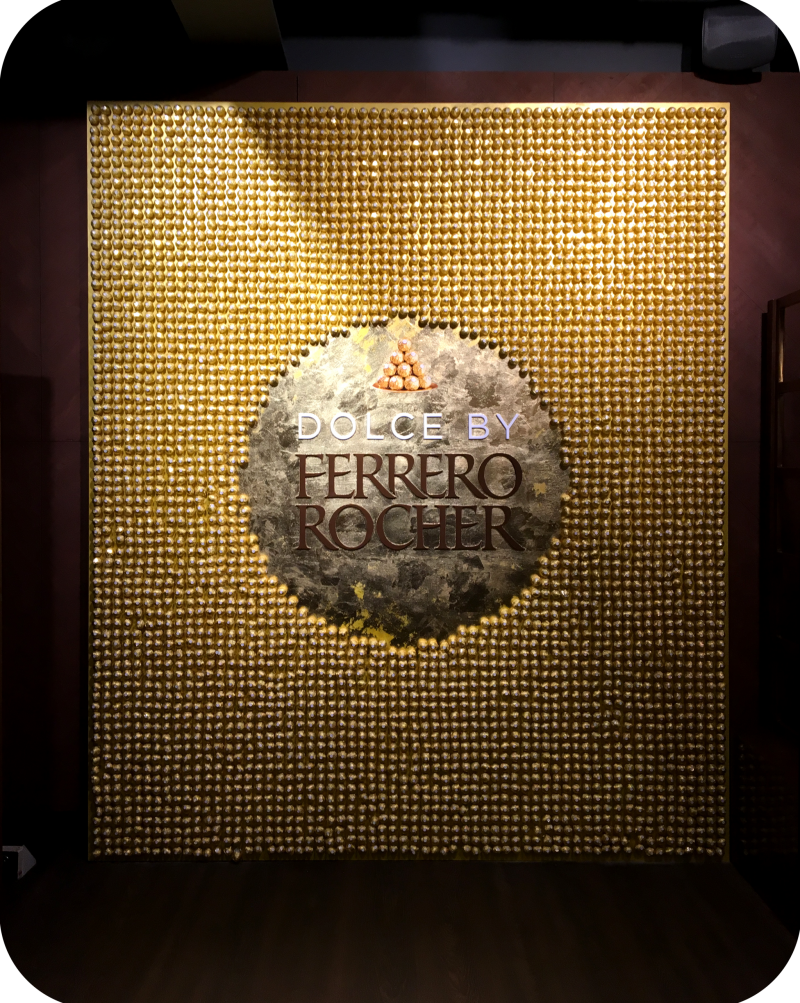 While there are walk-in slots available from 1pm to 10pm daily but I would recommend that you book. The wait can get pretty long and with the weather being unpredictable, you don’t want to be stuck in the rain. If there are no booking slots available, don’t be too put off people don’t always turn up to reservations and the desserts don’t take very long to eat.
Prices are £10 with tea and coffee and £15 for the desserts with a glass of prosecco. Hurry though, it’s only open until 11th December 2016.

My Shop Dixi Wishlist for July 2015

6 Reasons Why You Need A Bullet…