I’ve been wanting to write this review for a while but I’ve just been putting it off. Unless it’s a restaurant that I’m so eager to share with you all, it kinda just gets left in my drafts for an age. Still, it’s been a while since I’ve done a restaurant review, let’s do this!

Located in Kingly court, a hidden gem amongst the hustle and bustle of Soho, Stax stands proudly on the first floor. It has a cute dineresque feel from the outside and you can peer in very easily through the windows and see people stuffing their faces ha. Slightly awkward if you do get the window seats! 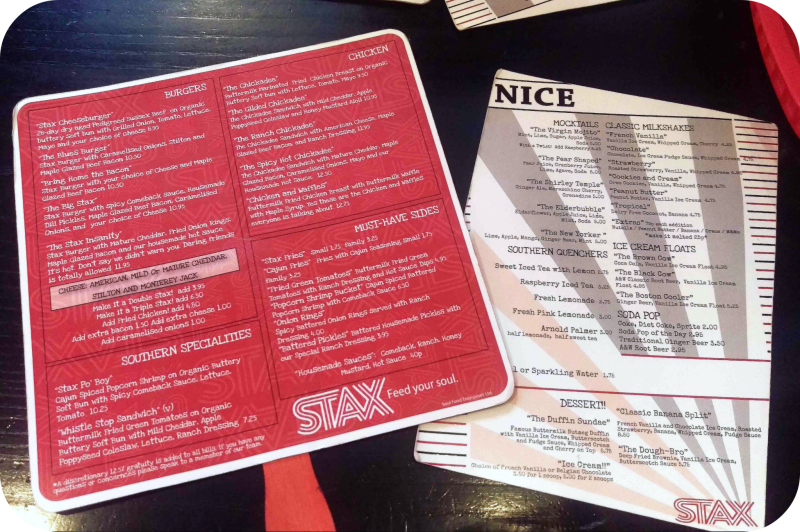 The restaurant itself is tiny. If you’re claustrophobic, it honestly isn’t the place for you. The tables and stools (yes I said stools, don’t ask) are crammed together and you’re constantly being brushed past by a waiter or passing customers. You might as well just be sat on one large table because it certainly felt like everyone was sitting with strangers. Luckily my friend Sharmin and I were put on a slightly seperate table that was meant for four. It gave us a little bit more room and somewhere to put our coats. I’m not entirely sure where you’re expected to put your bags and coats whilst sat on a stool. The layout just wasn’t working for me.

My rant doesn’t just end there. Oh no, I’m just getting warmed up! Stax has a terrible queuing system. It’s virtually impossible to walk in and be seated right away. The person manning the door will take your name and number and say they will give you a call when a table is ready. We were told that a table for two would be a 20 minute wait, which was reasonable. Since Kingly court is really quite nice to sit and chill out in, Sharmin and I decided to walk down the steps to the ground floor and have a seat on the benches whilst we waited for our phonecall.

25 minutes later still no phone call. Cue hangry Rosie storming back upstairs to make an appearance. We decided to not to be rude but do the very British thing of hovering near the door and do a polite apologetic wave, just in case he had forgotten us. As we stood trying to be subtle but totally obvious we were there, a couple walked in and were seated before us. Unbelievable. The waiter then had the cheek to come out and asked us if we’d like a seat. I was fuming. Still, we kept our cool and even though we had waited this long, we ended up waiting some more and were then eventually seated. 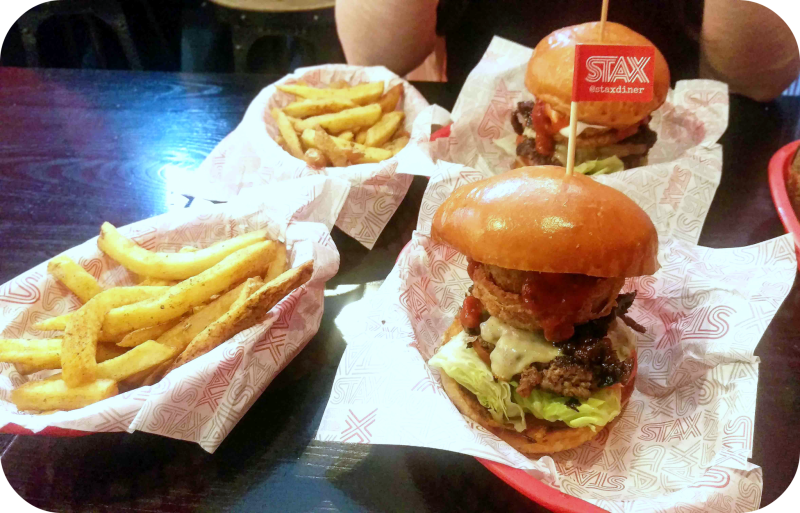 Unlike the host, our waiter was really friendly, he helped us choose our order since we weren’t sure which burger to go for. In the end Sharmin and I both opted for the “The Stax Insanity” with a side of Cajun Fries. Judging by the description, it was going to be super spicy and full of flavour.

The burger came out to us within decent timing and it was nice. Despite being starving and ready to devour anything that was put infront of me, I thought I would enjoy the burger a lot more but all I can say is it was just…nice. It wasn’t very spicy which was a little disappointing and the bun wasn’t very fresh as it fell apart quite quickly. The cajun fries were…not for me. If I’m honest they tasted like they were made from artificial potatoes. Is that even a thing? I don’t know but I couldn’t even get halfway through them.

Due to the queue of people peering in and constant brushing past of people going to the loo. I couldn’t wait to leave. The burgers are not the cheapest but considering it’s slap bang in the middle of central London, it’s what you’d expect. They are halal and they do serve mocktails so that’s some consolation.

Masaba Gupta: Why I want her to…