I wouldn’t necessarily consider myself a royalist. Don’t get me wrong, I like that we have a Royal Family but I wouldn’t say that I have a massive interest in them. There was always something about Diana though; even though I was only young when she died, I remember her being really likeable and feeling genuine shock when she died.

When the exhibition “Diana: Her Fashion Story” launched last year giving the public (ew) the chance to view her wardrobe up close I was conflicted. I love fashion, and really liked Diana but there seemed something slightly morbid about going to see a dead persons clothing collection, don’t you think? 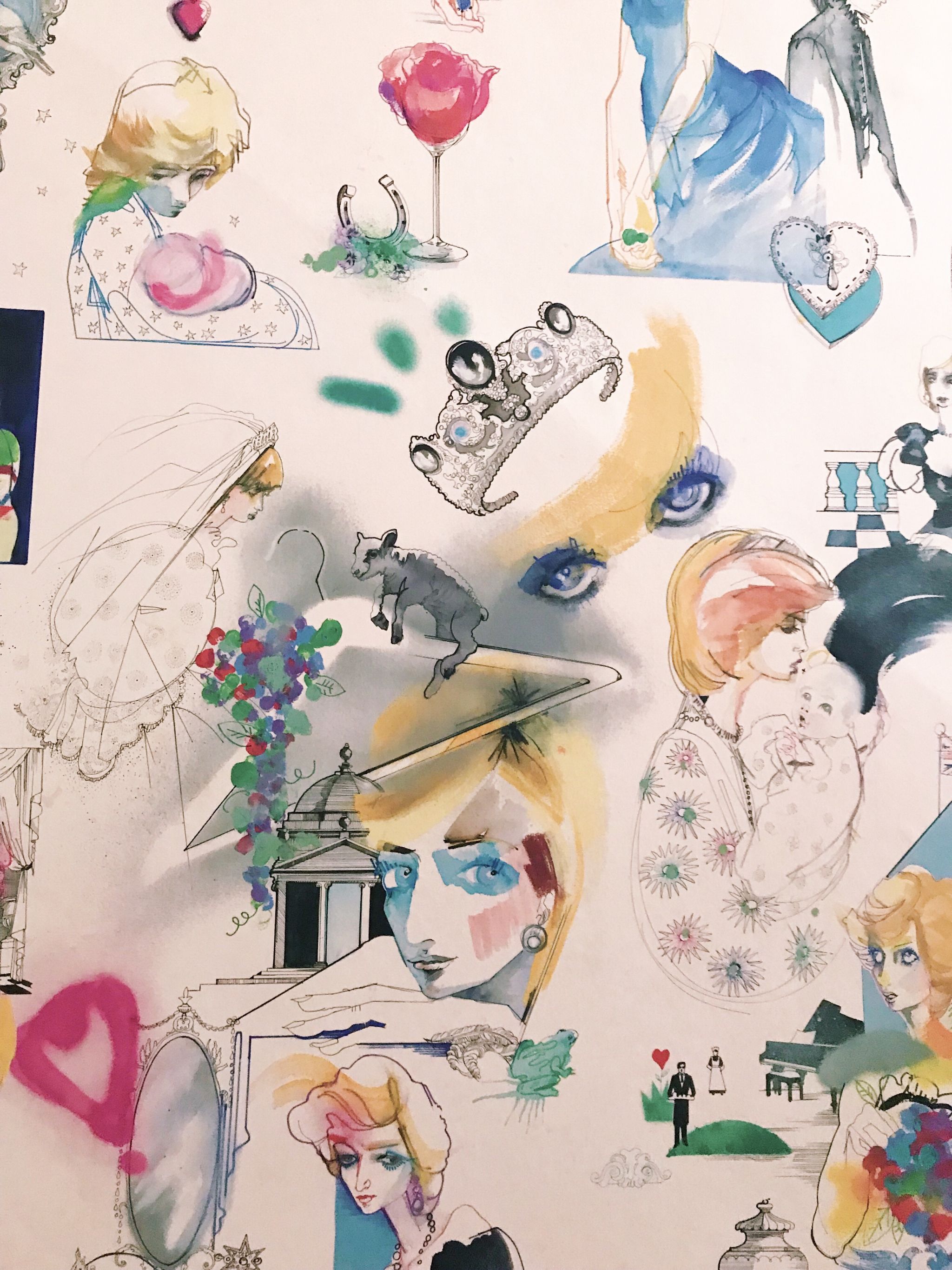 Then, last weekend, I was given two tickets to the exhibition and suddenly the excitement started creeping in and all my morals went out the window (LOL).

To get to the exhibition you have to buy tickets to Kensington Palace. The tickets include the Diana exhibit, as well as the public portions of the palace: The King’s Apartments, The Queen’s State Apartments, “Victoria Revealed” (in the apartment where Queen Victoria lived until ascending the throne and moving to Buckingham Palace in 1837—a must-see, especially if you’ve seen the PBS series, “Victoria”), and the exterior gardens, including a close-up view into the Kensington Palace Sunken Garden, where Prince Harry and Meghan Markle announced their engagement. I will do another post about the rest of Kensington Palace and why it’s definitely worth a visit but for today it’s all about Lady Di and her impeccable taste in fashion. 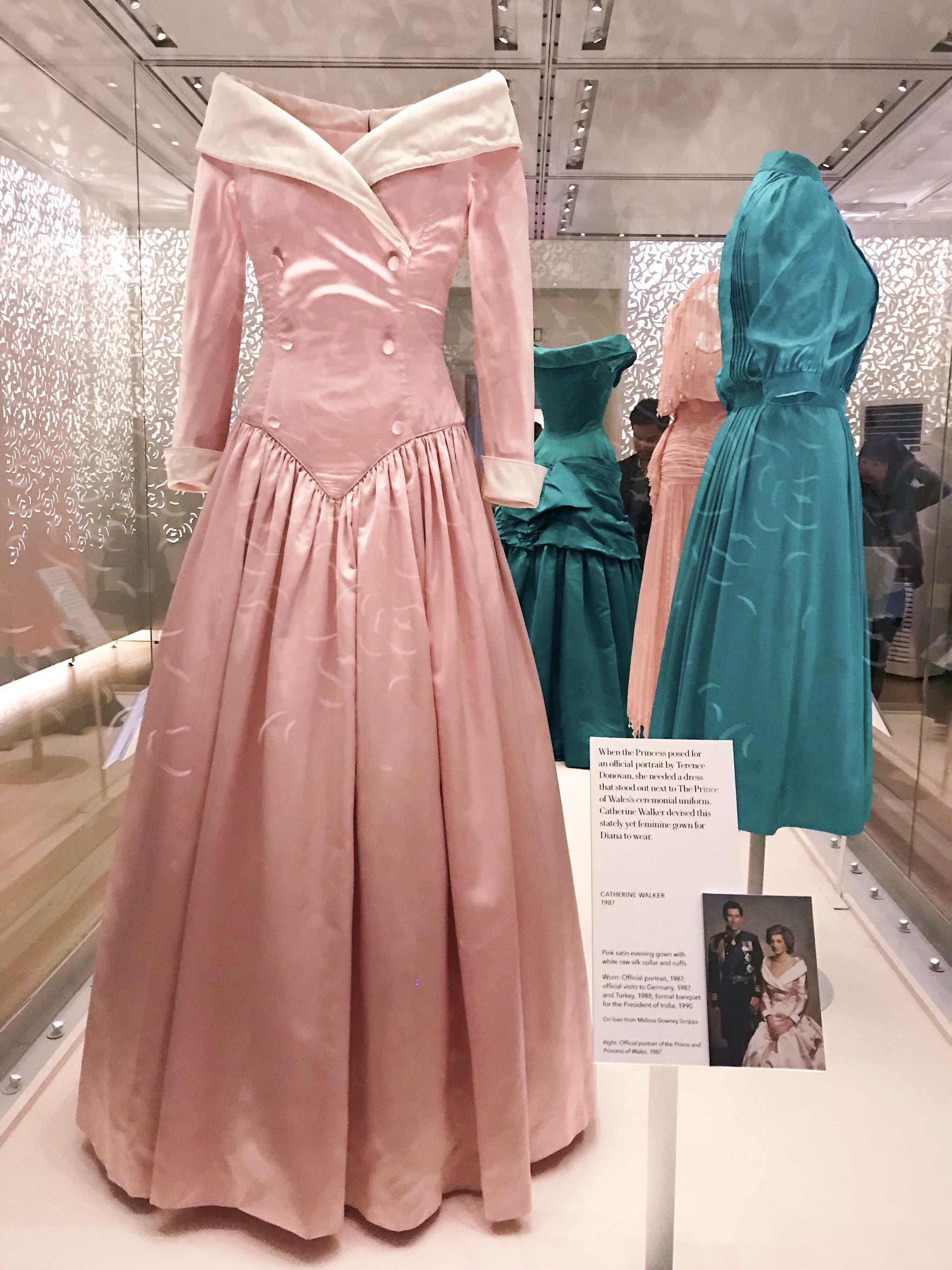 So the exhibition itself is quite small but they’ve done such an amazing job curating Diana’s fashion journey. They capture her simple, demure style in the very beginning, all the way up to her status as a style icon even now, almost twenty years after her death.

The people’s princess was the most photographed person in world, a timeliness style icon, whatever she wore people wanted to copy her.

The begining of the exhibition showcases how prior to becoming a Princess, Diana was unfamiliar with designer fashion. Her wardrobe consisted of some simple staples and I was surprised to learn that she borrowed a lot of what she wore from her friends.

It was only after her engagement to the Prince of Wales, she began to meet and form friendships with designers who helped her to create a working wardrobe. Her early style choices were characteristic of eighties fashion. An era with some questionionable fashion trends!

The first part of the exhibition was ‘nice’, by that I mean it was underwhelming. I’m just not a fan of 80’s clothing.

As we moved further into the exhibition and Diana started developing her style I was in awe. Now we were talking!! 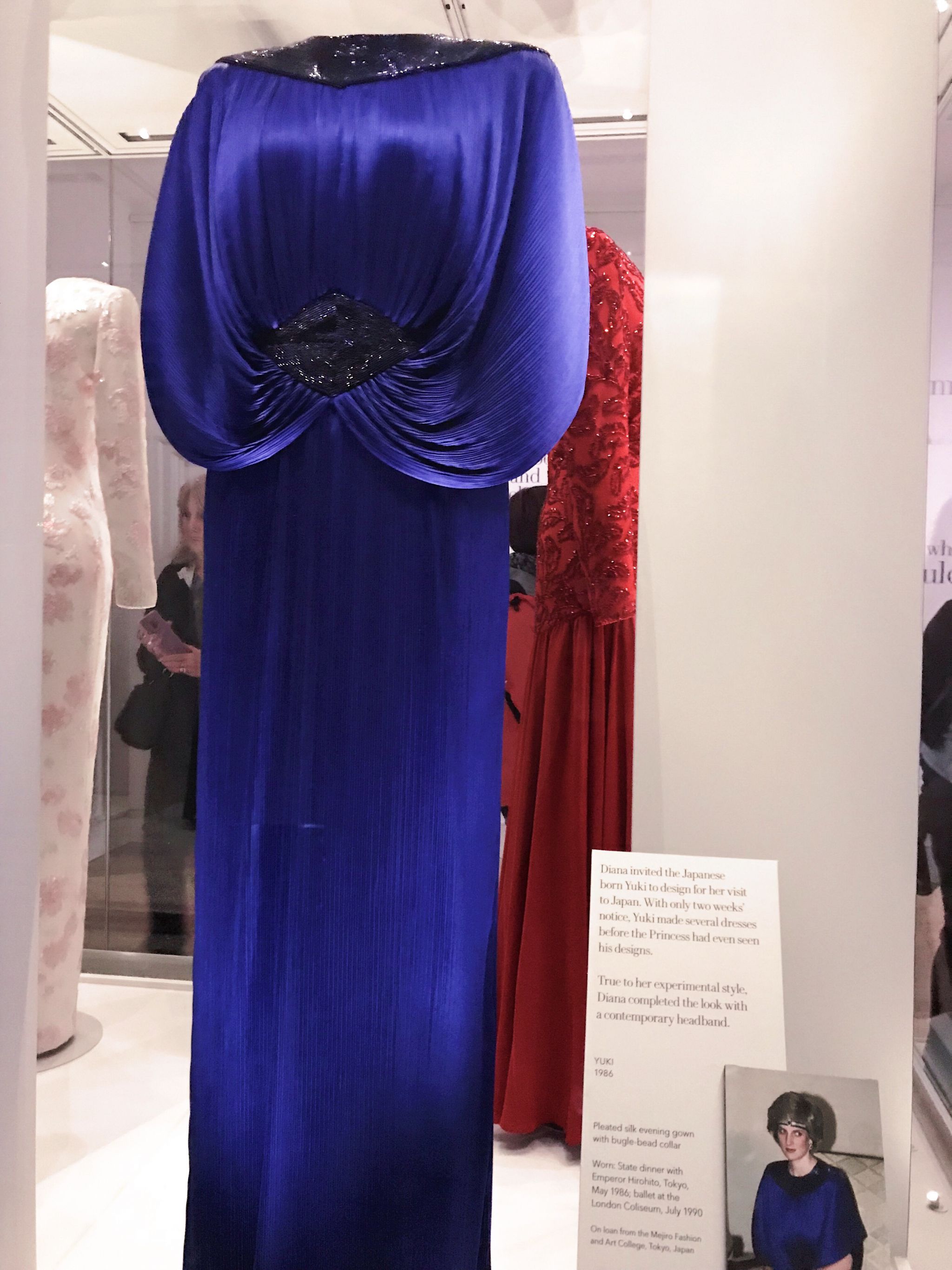 Diana commissioned designers to create bespoke pieces for specific appearances and these designers would work closely with her, sketching out her ideas and pinning fabrics to each sketch allowing the Princess to make notes, suggest changes and highlight what she liked. Together they would finalise each look.

As much as I loved all of the stunning dresses, my actual favourite part of the exhibition was a wall that featured a number of fashion illustrations. I wanted to take all of them home to hang up in my house! 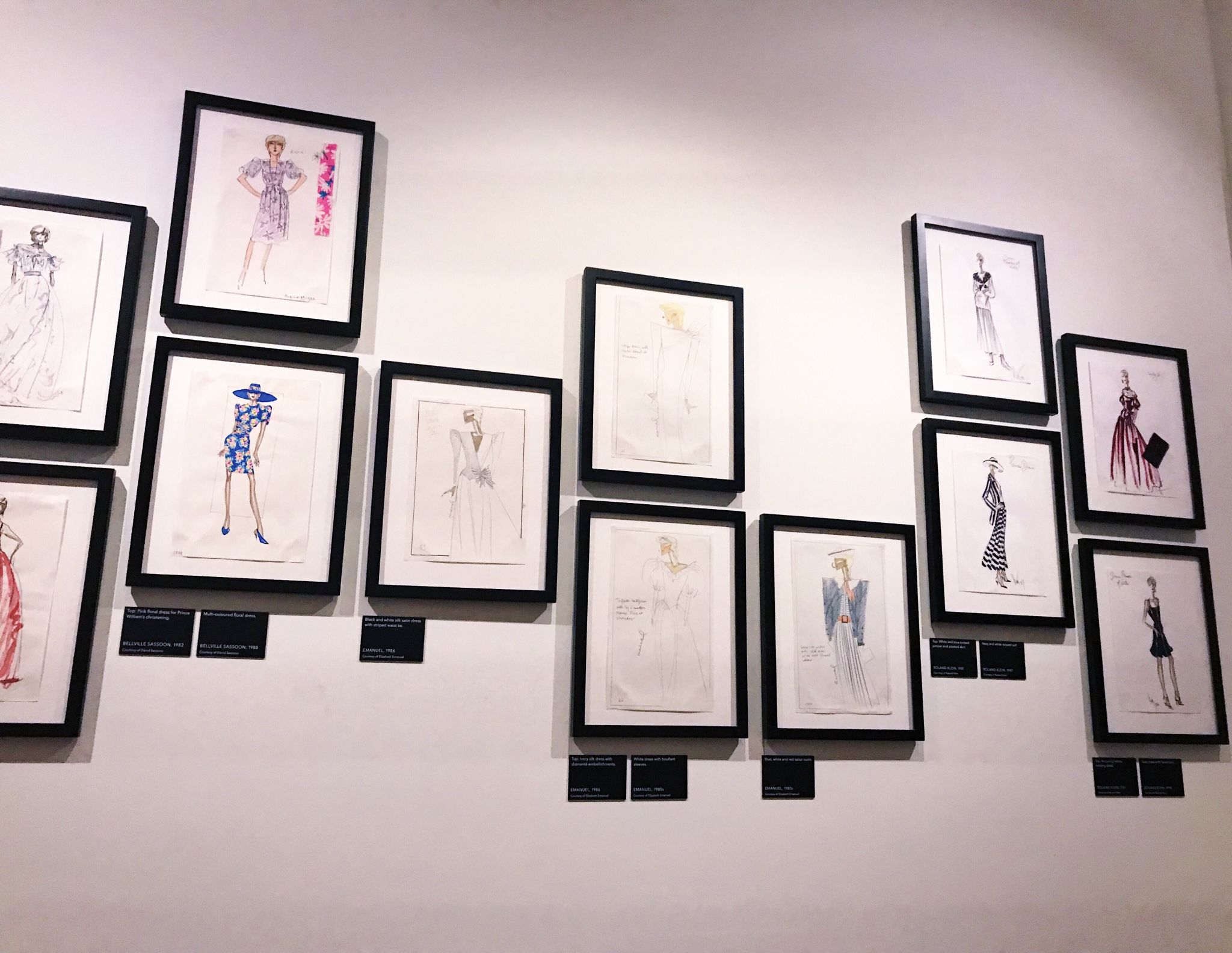 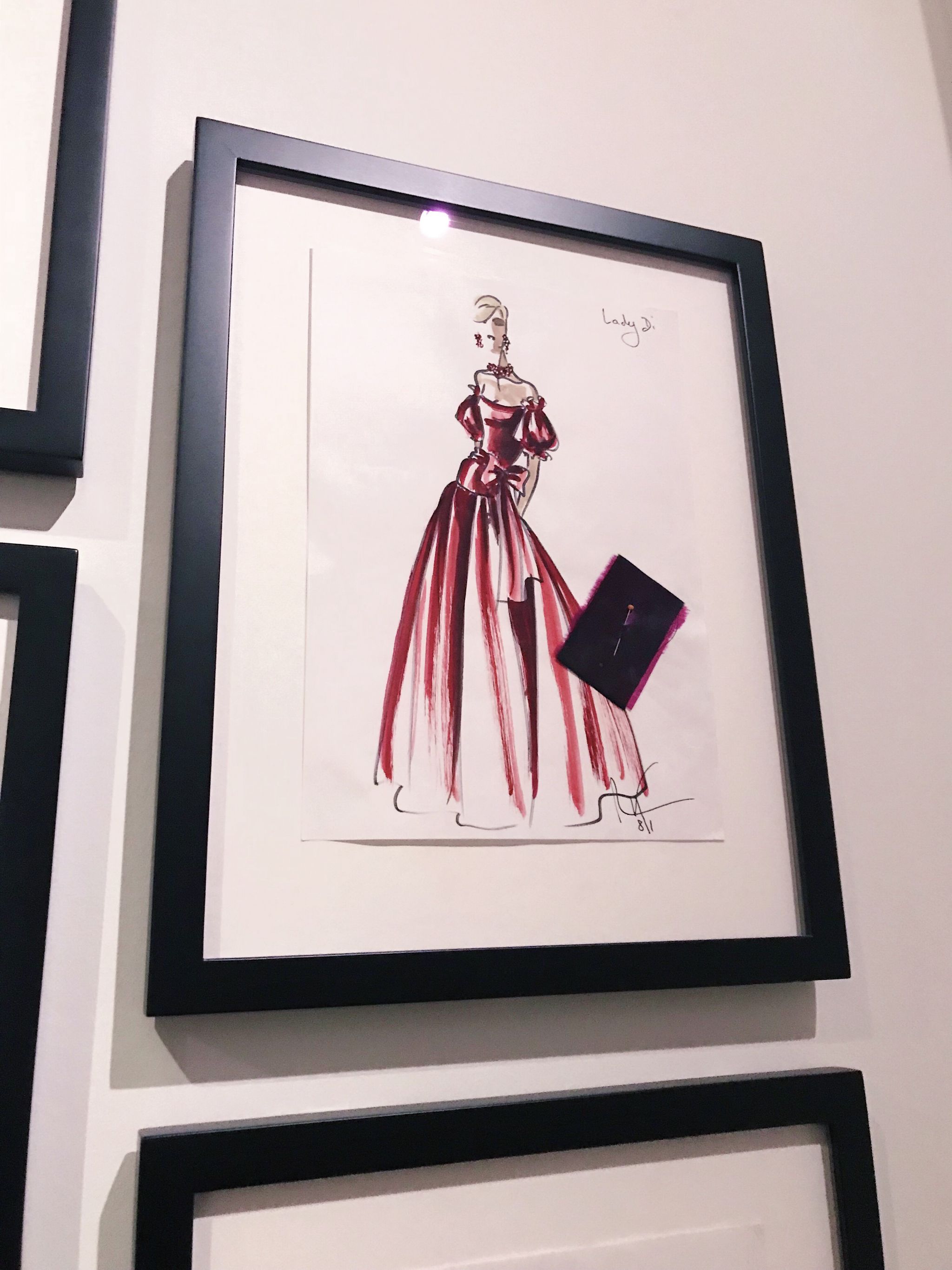 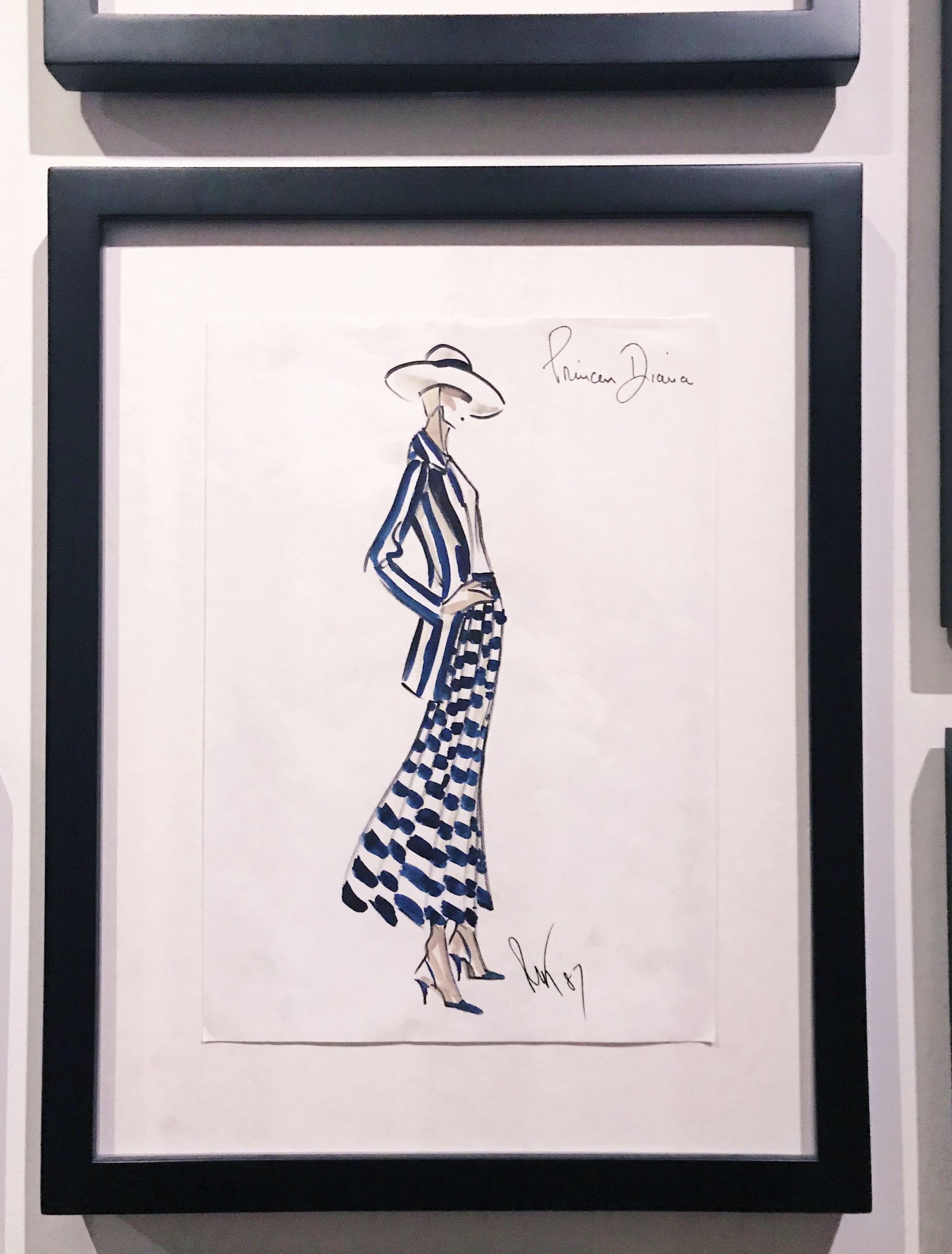 The exhibition also now includes the flak vest, denim sleeveless shirt and Armani chinos Princess Diana wore to the land mine fields of Angola in 1997, as well as the pink suit she wore when she boarded the train to begin her honeymoon in 1981. I’m really glad they put these in because it is a truer picture of her character.

Something else that caught my eye was this dress. The fact that she had created something that respected the customs of Saudi Arabia (modest clothing) and incorporated the national bird into a dress just said so much about her. 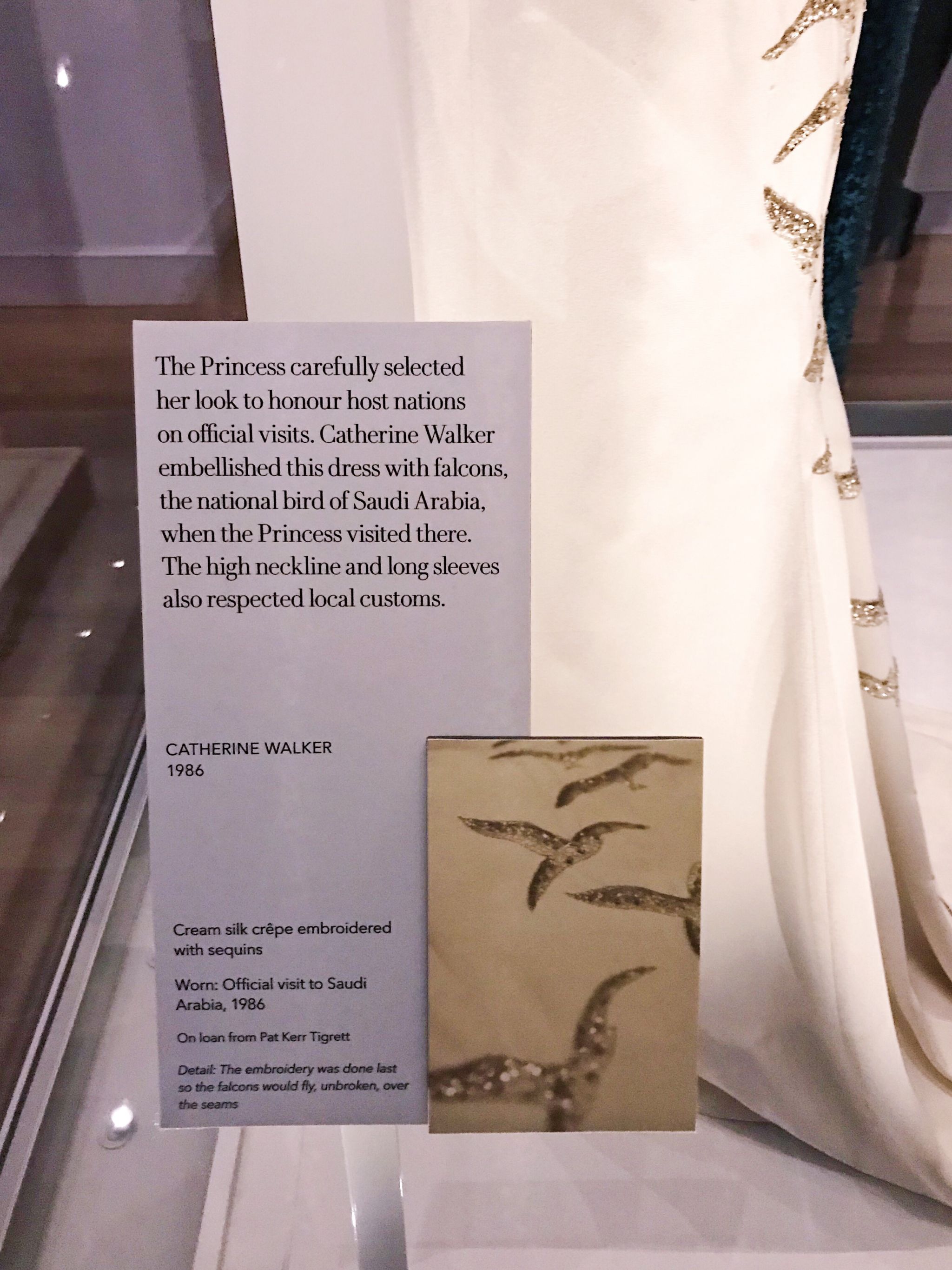 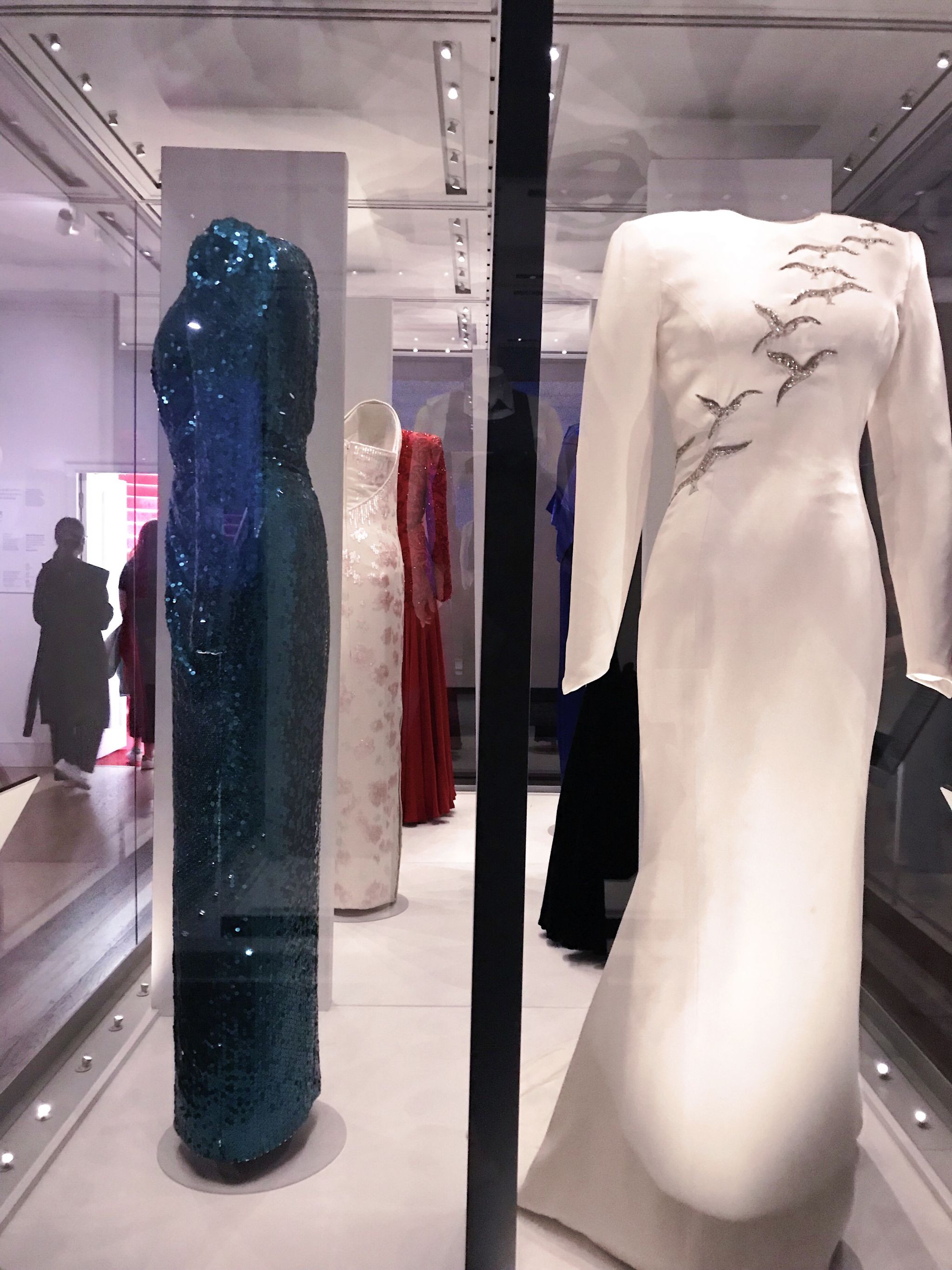 The Emmanuel’s wedding dress is a noticeable absence from the exhibition – not that it was meant to be there – but given this is her life in fashion that was a key moment and it’s one of the most famous dresses in the world. It would have been great to see alongside the other pieces.

For hardcore fashion fans the best part is a room featuring some of her most iconic dresses. The Atelier Versace gown by Patrick Demarchelier, for her Harpers Bazaar cover is stunning in real. Oh and Catherine Walker dress in green silk velvet, which she wore for her Vanity Fair photo shoot is something else. This room in particular really leaves you wanting to get behind those glass cases and try them all on!

All in all, it’s a beautiful collection of dresses and the entire exhibition is a beautiful tribute to Princess Diana.

Tickets to Kensington palace are £25.50 and can be bought here. I did think they were slightly extremely expensive for an exhibition but actually there is a lot that is included in your tickets. Definitely worth going to but be sure to go early so you can spend the whole day there, which you can do very easily.

Boohoo X Dress Of The Month

Sexual Violence in India: Is Bollywood to…