A few months ago I won a giveaway on Instagram. I entered on a whim even though I really really wanted to win, these things don’t happen to me so I completely forgot about it. Then randomly I got a message from Bellezza Clinics in London saying I had won! I even went on to see how the winner was chosen and all the names were entered into a raffle and mine was pulled out – I definitely had won fair and square!

I had won a free PRP facial aka a vampire facial aka the facial that Kim K herself has done!

Once I was over the initial shock I called up and spoke to Sebastiano on the phone. I have to say he was really really lovely. He explained that they have two branches, one off Oxford St and one in Chiswick and he was happy to accommodate and let me pick whichever was more convenient for me. It was really nice that this competition prize didn’t come with terms and conditions. We booked my appointment in for the very next day and I was stricken with both

I hadn’t been given any instructions to prepare myself or my face beforehand but I decided to go makeup free and skipped on any serums too.

So Sebastiano and I sat down and initially discussed what I wanted out of the treatment. I didn’t realise that PRP could be used for a range of things from scarring to hair loss! My immediate response was scarring because it’s my acne scarring is an insecurity of mine. I know that some will fade over time but if I can hurry the process up a bit then why on earth not!
Sebastiano also took the time to examine my skin colour, as some skin types would be left with hyperpigmentation after the treatment. Since my skin is quite fair he didn’t think it would be a problem to proceed. He took some photos of my face and asked me some health and safety questions. Honestly, i felt as if I was in really good hands and was going to be looked after. 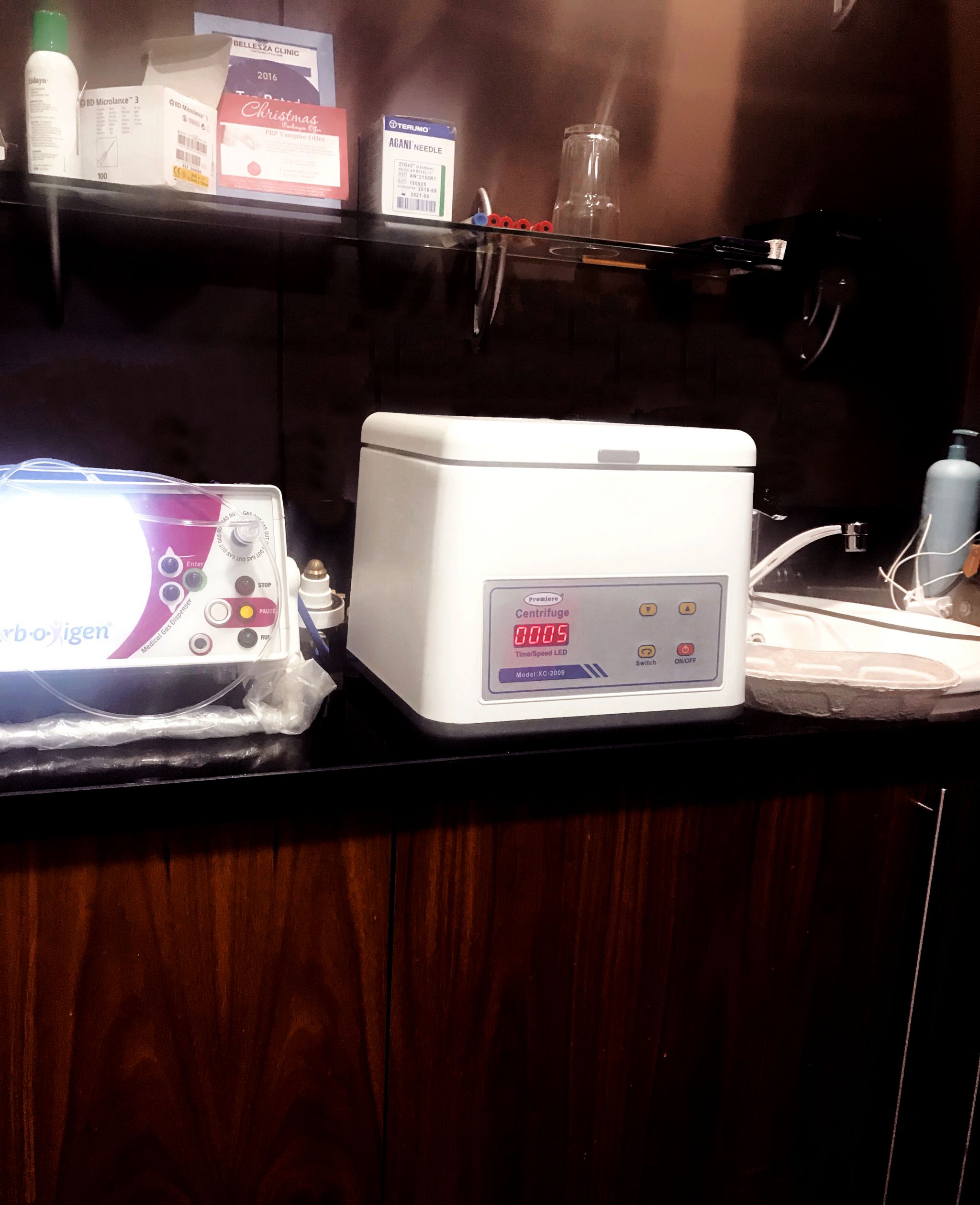 My face was first cleaned with alcohol and then a numbing spray was applied, followed by a numbing cream. This was all completely painless and the numbing set in within 5 minutes.
Whilst that all kicked in it was time for the part that I was dreading the most – bloods being taken!

I am quite uncomfortable with needles and I expressed this to Sebastiano but he was so lovely and clearly a professional because I didn’t feel a thing. I’m going to be real with you, I was completely petrified so I didn’t take photos. All I was doing was focusing on a vision of amazing skin and getting through it with ease.

If you’ve ever had your bloods taken, you’ll know that this part doesn’t take long at all. The blood was then put into a fancy machine called a centrifuge (pictured above). This spins the blood around really really fast so that it is separated into three different components; Plasma poor platelets, plasma rich platelets and red blood cells.

I was so fascinated by all of this that at that point I actually did get up to take a photo of it! The Plasma Rich Platelets are the good stuff that when injected into the area, it stimulates tissue growth and produces collagen to naturally rejuvenate your skin. 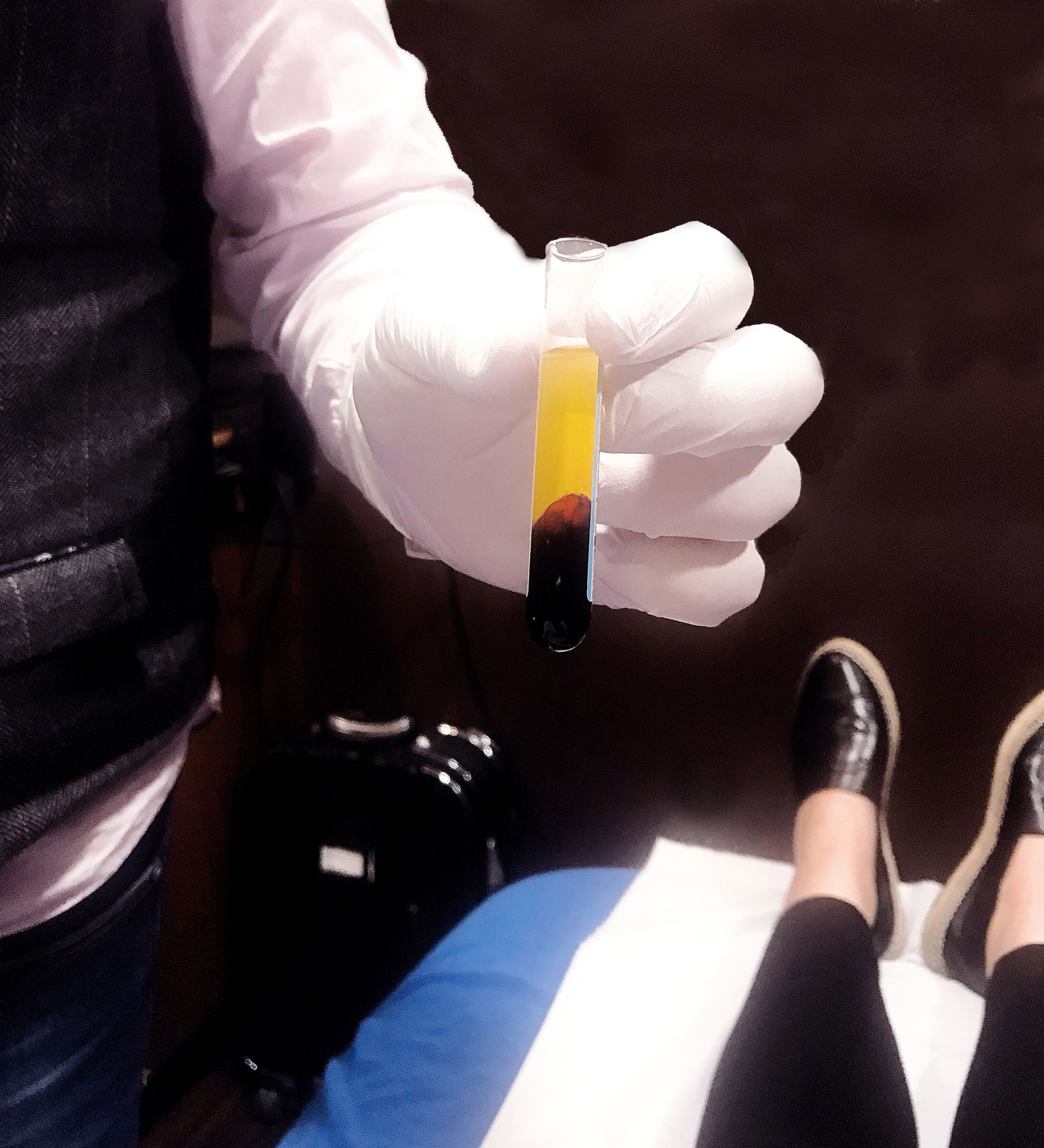 Next, using a dermapen Sebastiano began working his way round one half of my face. Dermapen is a device for microneedling (aka collagen induction therapy), a minimally invasive treatment to rejuvenate the skin. The device creates tiny punctures in the top layer of the skin, which triggers the body’s repair process. After the dermapen process was complete it was time for the last bit.
The Plasma Rich Platelets were injected back into my face. Particularly at the sites of prominent scarring – my cheeks and my temples.

I know the biggest concern people have and the one question I get asked the most is – how painful is it?
Now let’s be clear, I have a very low pain threshold, paired with the fact that I’m petrified of needles. My answer to the question would be that I would 100% do the treatment again without thinking twice. Because of the numbing cream, it’s virtually pain free. It was only when I asked for him to go all out with the dermapen so that I could get the best results that it felt slightly uncomfortable, but no pain still.

Once the treatment was done, Sebastiano applied Arnica cream to my face and recommended that I use a thick moisturiser and lots of SPF sun care. He also advised not to put any make-up on for 24 hours.

For some reason, I was under the impression that a PRP facial is ridiculously expensive and not affordable. Now I’m not saying £350 is not a lot, but at least it’s not in the thousands which is what I was expecting.

As the evening went on, my face felt quite hot and the areas where I had been microneedled became more and more red and sort of raised. In some places where Sebastiano had pressed quite hard with the derma needle, there was slgiht bruising, but nothing that panicked me….initially. I had  really busy evening so I went straight to sleep but I took some pictures the next day and you can see just how red my cheeks and temples are. Now I was panicking. I wasn’t feeling any pain or discomfort which was some consolation but I was slightly self conscious about it. Luckily Sebastian sent me a follow up text to ask how my skin was doing which reassured me. 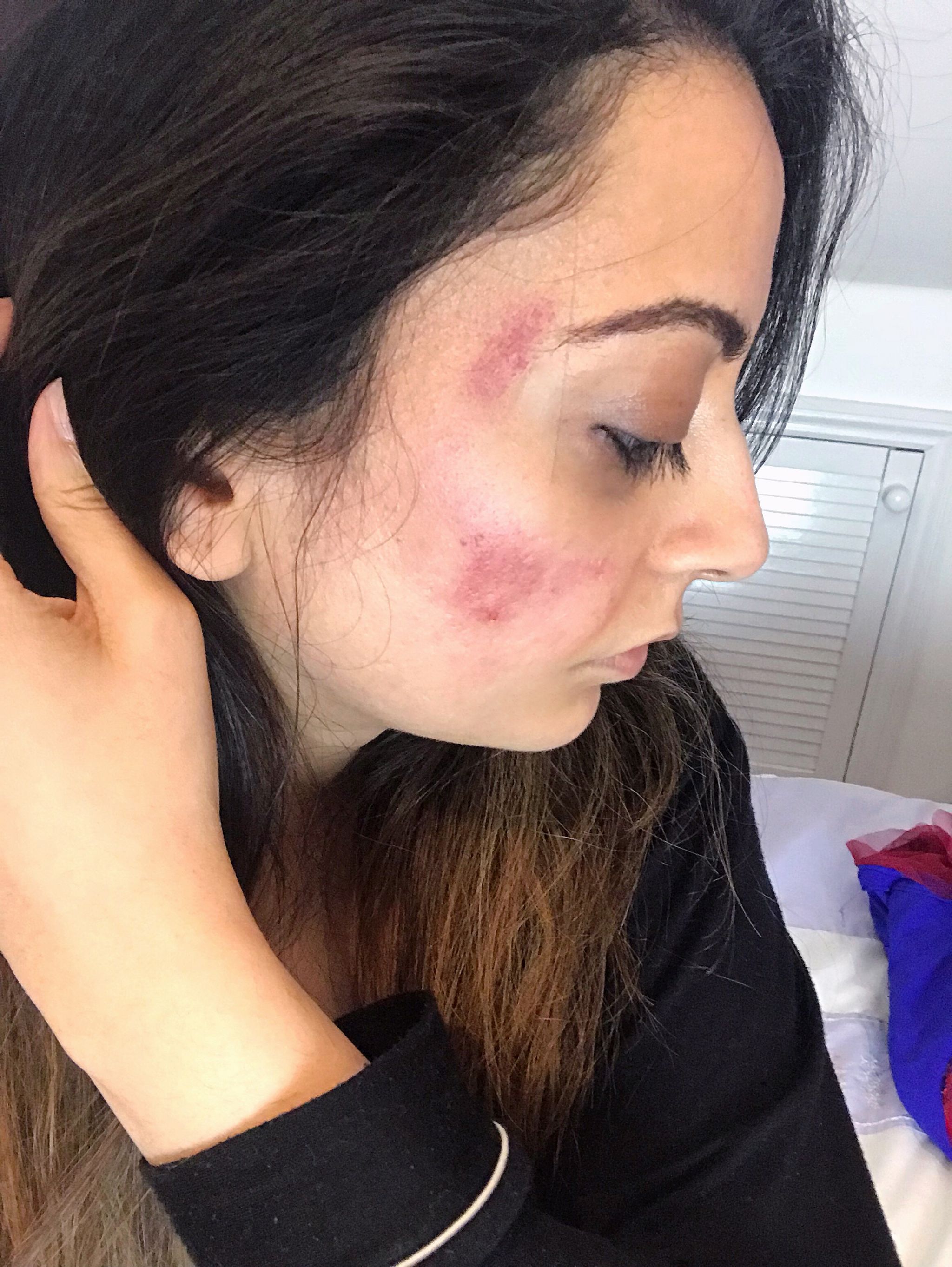 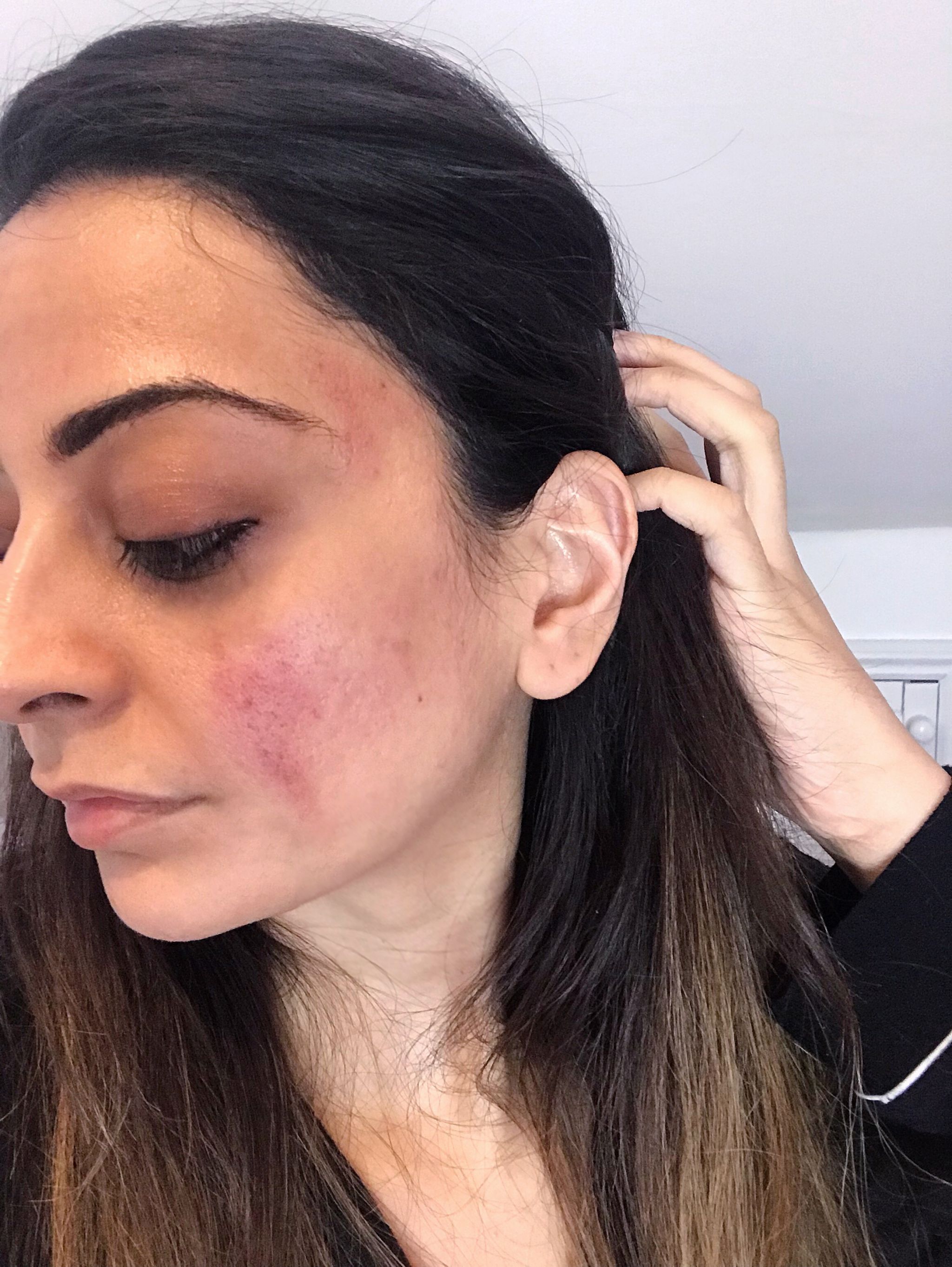 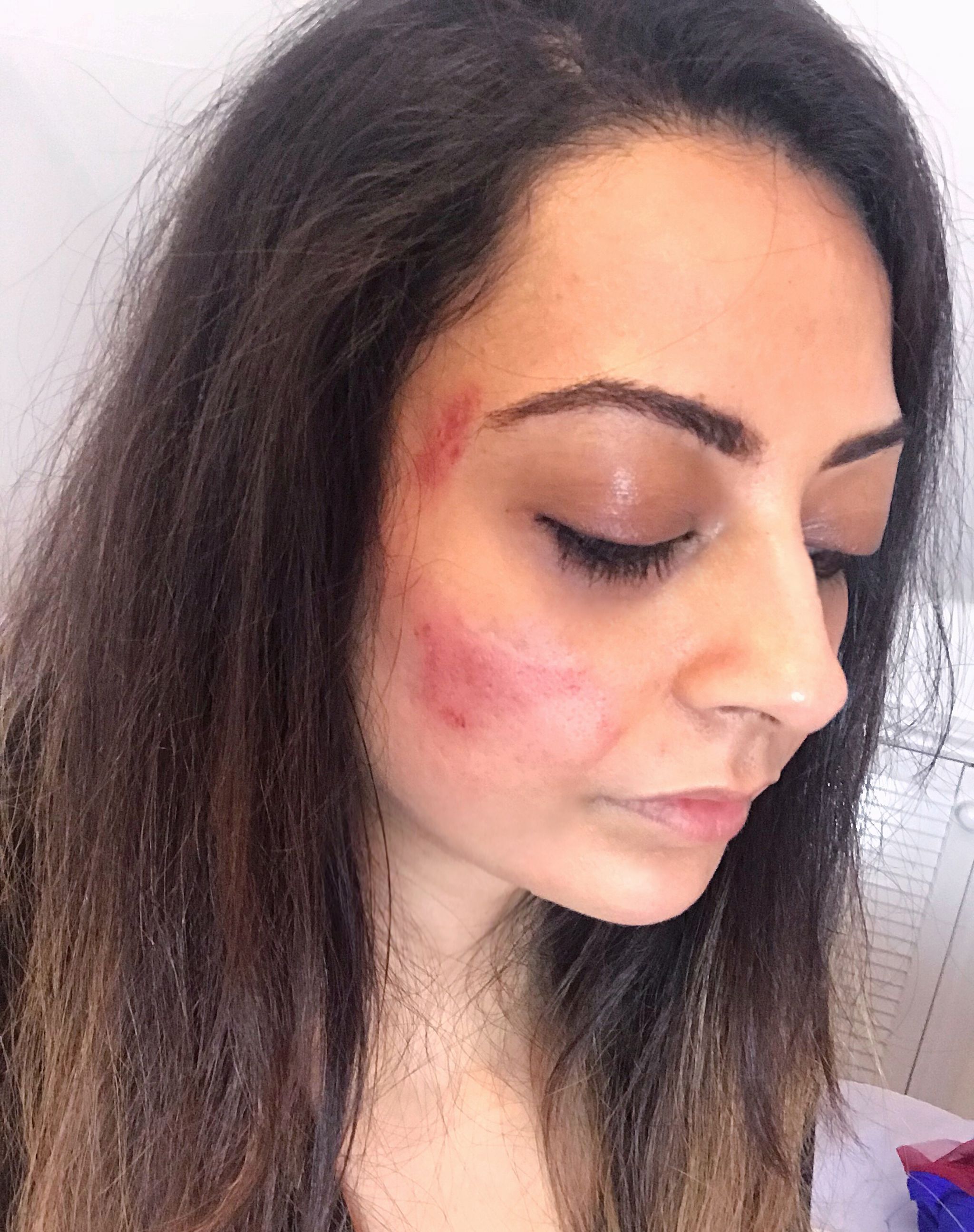 After 24 hours, I was desperate to see whether I would actually be able to cover it with foundation. I’m pleased to report that it was really easy to cover up.

Over the next week, my skin sort of scabbed over (that’s the best word I can use to describe it) and it became quite dry and peeled. I’ve had this happen previously when I’ve had microdermabrasion done so I knew it was nothing to freak out about at all. It’s just new skin growing and I loved it. I had a few people say my skin looked really good which made me feel so much better.

By the second week, the redness had completely subsided and my skin felt really smooth.

Sebastiano had told me that my skin will get better over the next few months. I must admit, I was sceptical about this, a few weeks yeah, maybe, but months is stretching it a bit. It turns out, he was actually correct. Over the next few months my skin felt as if it was getting better and better. I guess that just leaves one last question – are my scars gone? Let’s be real, that would have been a lot to ask for considering how deep rooted my scars are however there has been a huge improvement, especially on one cheek.

Does it actually work?

A September 2017 study found that after an injection of Platelet Rich Plasma, doctors observed an increase of reticular dermis thickness (the lower of the two layers of the dermis (skin). This thickening of the skin was due to deposition of elastic fibers (the stuff of skin elasticity) and collagen, with a fibrotic aspect (skin regeneration)

A June 2017 study found that Platelet-rich plasma induced a reduction in the manifestations of skin aging, including an improvement in wrinkles and elastosis (yellowish skin). In this research, doctors found that PRP provides growth factors that stimulate fibroblast activation (cells that start collagen production) and induce the synthesis of collagen and other components of the extracellular matrix. (The extracellular matrix is scaffold that collagen builds itself on.) The study focused on 18 women average age 49 years old.
The studies findings include:

Would I get a PRP facial done again? As I said, without a shadow of a doubt.  I recommend it to everyone and definitely recommend Bellezza Clinic if you’re considering it. They’re extremely professional and are very reasonably priced.

How To Tackle Getting Your Foundation Tested…