Did you know two women a week are killed due to Domestic Violence? Did you also know that 1 in four relationships are abusive. Let’s put that in perspective, if you have three other friends, it’s possible that one of you would experience abuse at some point in your lifetime. 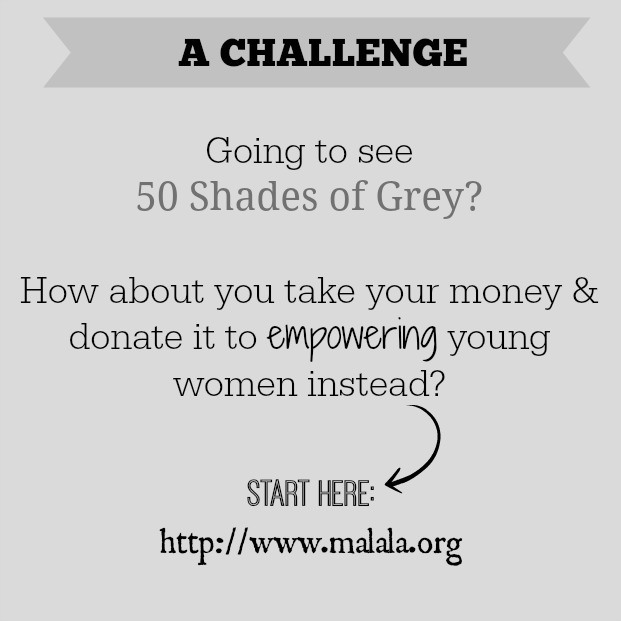 Today E.L.James’ publicist decided to do a #AskELJames hashtag on twitter and I’m jumping for joy at the amount of tweets I’m seeing expressing their concern and disgust at abuse and why it’s not OK. On the other hand, I’m absolutely fuming at women who are trying to make light of the situation. To those that have taken to your twitter accounts to call people raising awareness crazy or uptight, I’ve answered a few of your questions for you.

It’s just a fantasy book why do you care so much?

It’s not a children’s book so why are people stressing about their kids?

My personal concern is not just for children but for vulnerable women. If you’re hurt or lonely or feeling vulnerable it is SO easy for someone to take advantage of that. Vulnerabilities can sometimes mean you feel this controlling behaviour is the attention you want/need.

Don’t forget children are able to access so much without their parents knowing. Children/teenagers should not be growing up with the idea that a man needs to control you and your emotions to show you that he cares about you.

There’s so much talk about young impressionable girls who might think this is acceptable but let’s talk about how young boys/men who might feel that this is the way to impress girls. How would you feel about your son thinking it’s ok to stalk a girl? Did you know stalking is a crime?

People watch and like Game of Thrones and don’t murder anyone, why is this any different?

Time and time again women come to the refuge and say to me “he could beat me a thousand times and I could deal with it because I walked away from him. Bruises heal but the psychological damage will never go away”.

Abusive relationships are not always black and white. Often people don’t know that they’re in them or how they’re affected by them. Murder is flat out killing someone. DV is a series of events and behaviour that give power and control to one person over the other.

It’s important to speak out against abusive books because we can’t let societal norms form where abusive relationships are seen to be normal. For vulnerable readers, things like this could trigger something in their minds where they think coercive behaviour is OK and/or normal and the cycle begins again.

The figure of two women being killed every single week has not changed for as long as figures have been recorded. I for one will not sit back and makes jokes out of something which could enable this figure to rise. I want my children to have strong, empowering role models so that they can be the best versions of themselves so I’m making a stand. Why aren’t you?

These views are my opinion and I will not tolerate hate or abusive comments on my blog. If you want to genuinely debate or have anything interesting to say please do get in touch.

8 Things I Love To Hate About…